When i switched from shooting film to shooting Digital there was something i noticed immediately that i was missing, and that was film grain. Film grain is delicious FACT, its describe as ” the random optical texture of processed photographic film due to the presence of small particles of a metallic silver, or dye clouds, developed from silver halide that have received enough photons” but who cares man it can look damn good, giving an image an amazing texture, and unique look, but what about us digital users that want this traditional look in our images, well there is a way supplied by photoshop in the filters bit, but it just doesn’t cut it for me, so i opted to find my own way of recreating this look, and i’ll show it you now 🙂

Now, rather than us adding the grain directly to the image we will start by creating a new layer (Layer > New Layer) and then fill that layer with a neutral grey colour (Edit > Fill) clicking on colour and entering 777777, to get the colour we need 🙂

Okay doke, everything has grey do not panic this is the way its suppose to look lol 🙂 now we need to add the grain, we are going to use photoshops noise filter for this, because not only does it actually look like the real deal but it also gives us the opportunity to choose how much of the effect we want to use so FILTER > NOISE > ADD NOISE. 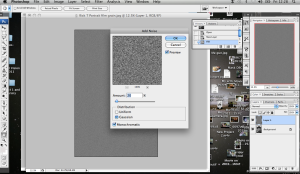 HMMMMMM… a yummy grey box of grain lol, now, i set my noise to 20% but this is preference really depending on how strong you want the effect, make sure you tick the gaussian and monochrome boxes before you click ok. The noise still looks like noise so now we need to make it much more realistic, we are going to do this by using the good old gaussian blur filter, So FILTER > BLUR > GAUSSIAN BLUR. 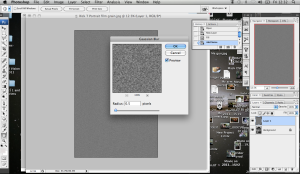 I set my blur at 0.5 of a pixels, but again, play around with it and see what you like best 🙂 now the final step is to bring everything together to create your grainy image, so its the easiest bit, just simply set your blending mode from normal to overlay and VOILA!! 🙂

Portrait after the grain Effect was added, Image Arron Hansford The changes are subtle but can make all the difference to an image, as with all the mini tips i put on here, change things around and see what works best for you and your photographs 🙂

You are currently reading Grainy Goodness… at Arron Hansford.